Two partially overlapping and continuous drilling campaigns were mounted around the Falklands between February 2010 and January 2013. Sixteen wells (plus two sidetracks to core) were drilled in the North Falkland Basin plus one in the Falkland Plateau Basin using the Ocean Guardian, and a further four wells were drilled in the Southern Basins – two in the Falkland Plateau Basin and two in the South Falkland Basin – using the Leiv Eriksson. Falkland Islands onshore facilities and local businesses were more than adequate to cope with the logistics of running this multi-well, continuous operation.

A number of discoveries were made as a result of the drilling campaigns since 2010. The Sea Lion oilfield and its associated nearby satellite fields Casper (gas and oil), Casper South (gas and oil) and Beverley (gas) were discovered on the eastern flank of the North Falkland Basin, while the Liz field (wet gas/condensate and dry gas at a deeper level) was discovered on the western flank of the North Falkland Basin. The Darwin gas condensate field was discovered in the tilted fault blocks below the foreland basin cover developed in front of the thrust belt in the South Falkland Basin. Several other wells encountered notable oil and/or gas shows; for example, the Loligo well in the Falkland Plateau Basin, although not categorised by FIG as a discovery well, has been shown by FOGL to have potentially large amounts of gas in place, but in poor quality reservoirs that did not flow gas to surface.

Development planning is well underway for the northernmost part of the Sea Lion field, which has a medium gravity crude oil ranging from 26.4° to 29.2° API. A well test in the vertical hole 14/10-5 using an Electric Submerged Pump (ESP) system and Vacuum Insulated Tubing (VIT) resulted in a stabilised flow rate of 5508 barrels per day, and a maximum flow rate of 9036 barrels per day from the upper Sea Lion sandstones. It is anticipated that higher flow rates will be achieved by horizontal drilling of the reservoir section during development. The southern parts of the Sea Lion field, along with the associated satellite discoveries of Casper, Casper South and Beverley will be developed as a second phase of the Sea Lion field, in conjunction with any further nearby discoveries subsequently made in that part of the basin.

No appraisal drilling has been undertaken for the Darwin gas condensate discovery in the South Falkland Basin, although initial engineering and commercial scoping studies have been conducted by Borders and Southern Petroleum, who aim to demonstrate that the 200 million barrel discovery is commercially viable by proving the resource estimates through appraisal drilling and well testing. The Darwin well 67/17-1 encountered a 84.5m thick sandstone reservoir interval with a net pay zone of 67.8m. Average and maximum porosities encountered were 22% and 30% respectively.

Licensing and exploration activity after the first drilling campaign:

2012 – Edison and Nobel farmed into the FOGL acreage in the Falkland Platea Basin.

2012 – Premier farmed into the Rockhopper acreage in the North Falkland Basin and assumed operatorship of the acreage.

2011 – a new set of 3D surveys were completed over large parts of the North Falkland Basin by Argos, Desire and Rockhopper.

2009 – Rockhopper reclassified the 14/05-1A Shell well as a gas discovery on the basis of their re-analysis of the gas shows recorded in the lower part of the well, in a feature they term Johnson.

2008 – a new 3D survey was completed in the South Falkland Basin by Borders and Southern Petroleum.

2008 - a new licence covering 2.25 blocks in the southern part of the North Falkland Basin awarded to Desire Petroleum in association with Arcadia Petroleum.

2007 – a new 3D survey was completed in the North Falkland Basin by Rockhopper.

2007 – a new CSEM survey was acquired by FOGL in the Falkland Plateau Basin.

2007 - FOGL were required by Government to relinquish PL030, followed by, in December 2007, 25% of the remainder of their 2004 licences. BHP Billiton farmed into all the FOGL acreage.

2006 - FOGL relinquished 50% of their licence holding in their 2002 licences held in conjuction with Hardman Resources. This relinquishment was required by the Falkland Islands Government in exchange for changes to the agreed work programme.

2006 – a new CSEM survey was acquired by Rockhopper over parts of the North Falkland Basin.

2005 - FOGL/Hardman relinquished a further 18 blocks as per their licence agreement.

2005 - two new licences covering 6 blocks in the northern part of the North Falkland Basin awarded to Rockhopper Exploration. These 6 blocks were previously licensed to Shell and Agip.

2004 – a new 3D survey was completed in the North Falkland Basin by Desire.

2004 - A further seven licences, covering 195 blocks over 7 Quadrants in the Falkland Plateau Basin were awarded to Falkland Oil and Gas Ltd in December 2004. Unlike the other acreage held in the southern basins by FOGL, Hardman Resources do not partner them in these new licences.

2003 – two licences and 37 blocks (90 blocks in total), relinquished by the Falklands Hydrocarbon Consortium (Falkland Oil and Gas Ltd and Hardman Resources) in the southern area as per licence conditions. 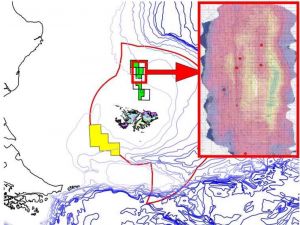 1996 - seven Production Licences were awarded (to 14 companies) in the North Falkland Basin as a result of a competitive bidding round. The licences covered 48 blocks (some 12,800 square kilometres). 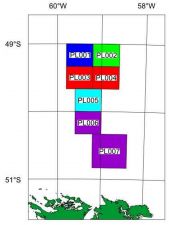 1970s - a range of mostly academic studies were undertaken, culminating in drilling of the three DPSP boreholes on the Maurice Ewing Bank, proving the existence of potential oil source rocks in the area.