About the Executive Council?

Executive Council (ExCo) is responsible for the formulation of strategy and policy, and for high level management decisions. Meetings are held at Government House once a month, but more often if required.

Each year the elected Members of the Legislative Assembly (MLAs) elect three of their number (representatives from Stanley, Camp and Stanley or Camp) to the policy making body of the Government, Executive Council. Executive Council is chaired by His Excellency the Governor. Membership also includes the same ex-officio members who sit on the Legislative Assembly and in addition the Attorney General and Commander of British Forces South Atlantic Islands (CBFSAI) may attend and speak on any matter. 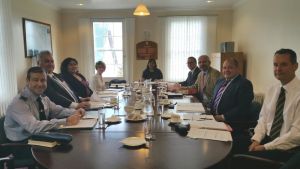